It’s simply a technique that not too many people know about.

And its only limitation is how wrecked your finger strength already is from your last climbing session.

In other words, it’s ideal for any climber who’s not already training their finger strength to maximum capacity through their climbing sessions.

For example, if your fingers and wrists are completely limp between climbing sessions, then there’s no way you could push it any further.

However, let me say, that if that’s the case then you’re probably really overdoing it. Ease up on the intensity of your climbing sessions and start lightly training your finger strength every day.

“Every day?” you wonder. “But I thought that you should leave at least 48 hours between workouts for your muscles to repair?”

Well, not according to a recent study which showed that training the same muscle group once per week was not any more effective for strength gains than spreading the same amount of exercise over five days per week.

And then there’s this study which showed exactly the same thing. Spreading the workload over three sessions per week made no difference compared to doing it all in one session per week.

And this study which showed that training on consecutive days is no less effective than leaving a day between training sessions.

And then there’s this one which showed that twice-daily training sessions made no difference in strength gains over training once daily.

…I think you get the idea by now.

Except there’s something else about this that’s important to note. You see, in the last study, the researchers noted that “the twice-daily group might provide some rationale for dividing training load in an attempt to reduce the risk of overtraining.”

In other words, the more you push yourself to do all your training in a single, infrequent session, the more likely you are to injure yourself.

Of course, this is pretty much common sense. If your wrists are limp and your fingers are weak after each climbing session, you’re pushing yourself too much in one go.

In fact, pushing yourself past your limit and injuring yourself this way is only going to hold you back. The researchers in this paper note that “increasing the number of sets performed per exercise session… does not appear to be an effective method for increasing muscle size once a given threshold is surpassed.”

They visualized those “wasted sets” that in this graph here:

As you can see, there’s absolutely no point pushing yourself harder on your climbing sessions if you want to improve faster. You’re just going to injure yourself.

And yes, going past your limit and having a weak grip for the next few days is injuring yourself. Finger strength, grip strength, whatever you want to call it, isn’t the same as training other muscles. Your finger movements start in your forearms, and only the thin tendons of your forearm muscles are found in your hands.

You can take a look at this resource here if you’re interested in learning more about how these tendons work.

Anyway, the point is, tendons are delicate, and you’ve probably noticed that they take far longer to repair than your muscles do.

By training your tendons and forearm muscles every day, you’ll be able to break the cycle of “injury, rest, injury, rest” by evening out the load across your week.

This will get you closer to your ultimate goal of being able to climb harder much faster, because it is precisely those “wasted sets” that are the ones which are injuring you and putting a limit onto your training frequency.

So, take advantage of the technique I’m about to show you, because with it, you can train your finger tendons and forearm strength anywhere, and without any equipment at all.

And what’s more: it’s much safer than hangboarding, because hangboarding is a bodyweight exercise, and this is a self-resistance technique.

The difference? Bodyweight exercises are extremely limited. They only provide one set level of resistance: your entire bodyweight.

And, as you can imagine, that can be far too severe for the delicate tendons and ligaments in your hands unless they’re already somewhat developed.

That means that hangboarding as a beginner or intermediate climber is totally out of the question.

Of course, some people do it anyway, and those who don’t take it easy get injured. Hard.

For most people, their first serious finger injury is their exit out of climbing. There’s nothing quite like months of continuous pain to put someone off their favorite hobby.

Fortunately, training your finger strength doesn’t have to be “all or nothing.” A self-resistance technique is only as forceful as you want it to be, and you’ll naturally decrease that force when you’re starting to get worn out if you focus on keeping your movements smooth.

As you can imagine, that means you’re far less likely to overexert yourself than if you were doing a bodyweight exercise.

So, I’ve gone on long enough. It’s about time we actually took a look at this technique.

Your grip strength will get stronger by gripping things hard, just like how lifting weights will grow the muscles that you use to lift them with.

Those weights provide resistance to the muscles. The only difference with self-resistance is that you’re providing that resistance yourself, pitting muscle against muscle.

You can do this with any muscle of course, but right now we’ll just be looking at developing your grip strength. “Grip strength” is just a general term that basically means everything to do with the muscles and tendons that make up your “finger strength,” “wrist strength” and “forearm strength.”

The way that you provide resistance to your grip strength is simple. With both wrists straight, push down against your other hand with just your fingers, using that other hand to provide the resistance to your finger while still allowing them to move through a full range of motion. That means, from being straight, to being curled all the way downwards, and then back to being straight again, and so on until you’re done .

I’d highly recommend training your thumb strength separately, because your hand needs to be in an underhanded position to do that, while your fingers need to be trained overhanded.

Now, you’re probably wondering why this is better than just squeezing something like a stress ball or one of those grip strength trainers like the one below: 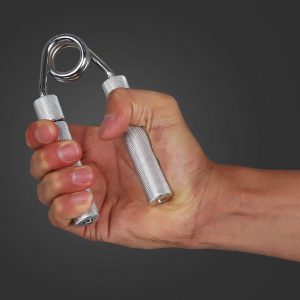 The reason is, that these grip trainers don’t allow you to make a full range of motion, which means you’re only training your grip strength at one set finger position. If you want the fancy name for it, it’s called an isometric exercise, whereas the self-resistance “finger curls” I’ve been talking about are an isotonic exercise, which means they go through a full range of movement.

Now, when your fingers grip something, they’ll naturally be making an isometric contraction because your fingers won’t be moving. When you grab a hold in climbing, your fingers are clamped down.

However, there’s a reason why it’s better to train your grip strength through isotonic exercise rather than isometric.

The beauty of self resistance finger curls is that you can train your grip strength in all finger positions by using a full range of motion. If you tried this with a hangboard you’d be putting way too much strain on your tendons, and if you tried this with weights you’d have to balance really light weights on your fingertips while you do finger curl reps, which would just be plain weird. The closest you can get is doing barbell finger curls which are more like a rolling motion.

“With a hangboard or barbell finger curls, you can train both hands at once.”

Well, you can do that with self-resistance finger curls too.

Simply push fingertips against fingertips. Your fingers will make a swirling “S” shape, with one hand overhand, and the other underhand. It’s so simple and effective that there’s no reason to do it any other way.

You can do this with “wrist curls” too. With closed fists, knock your finger knuckles against your other hand’s knuckles, and do the same full range of motion. Work on the sides too, because you often make left and right traversing movements in climbing.

Now, after having said all this, I want to remind you again. Take it easy. If you’re doing this right, you won’t get weak grip strength and limp wrists the next day like after an overly-intense climbing session.

Take it easy, gauge how much training is right for you, and, if in doubt, ask your doctor before taking on a new exercise regimen.