Okay, let’s face it. Climbing is something that requires at least some degree of strength and flexibility for it to be even possible.

I’m not talking about some crazy olympic-level powerlifting contortionist kind of fitness here. More like you need to be able to at least move your arms and legs, and be strong enough to clamber up the stairs on all fours like you did when you were a kid.

That being said, unless a five-year-old can beat you at an arm wrestle, you shouldn’t be too old to climb.

What Level of Fitness is Required for Climbing?

I’d say the cutoff point would be if you’re unable to walk without a walking stick.

If you use one because you’re getting older, but you can still make do without it, then you’re still golden. The great thing about climbing is that it really whips you into shape.

Besides, you’ll be surprised by how easy the beginner routes are. To be honest, you can have plenty of fun just doing those.

There’s so many of them, and you’ll build up your confidence pretty quickly. You’ll be challenging yourself with the harder color routes before you know it, throwing yourself at them like a crazed animal desperate to reach its prey.

Should I Go Rock Climbing, or Bouldering?

Here’s one piece of advice:

Go rock climbing, because you’ll have a harness to hold you up, and a friend down below who’s keeping you pulled up. It does take a lot of your weight off you, so it’ll kinda feel like cheating compared to bouldering, but cheating is what you need when it’s not a level playing field to begin with.

As you can imagine, that’s not particularly knee-friendly.

If your knees are made of glass, you can still climb just fine, and the exercise will eventually make your muscles strong enough to mitigate some of the impact on your joints. 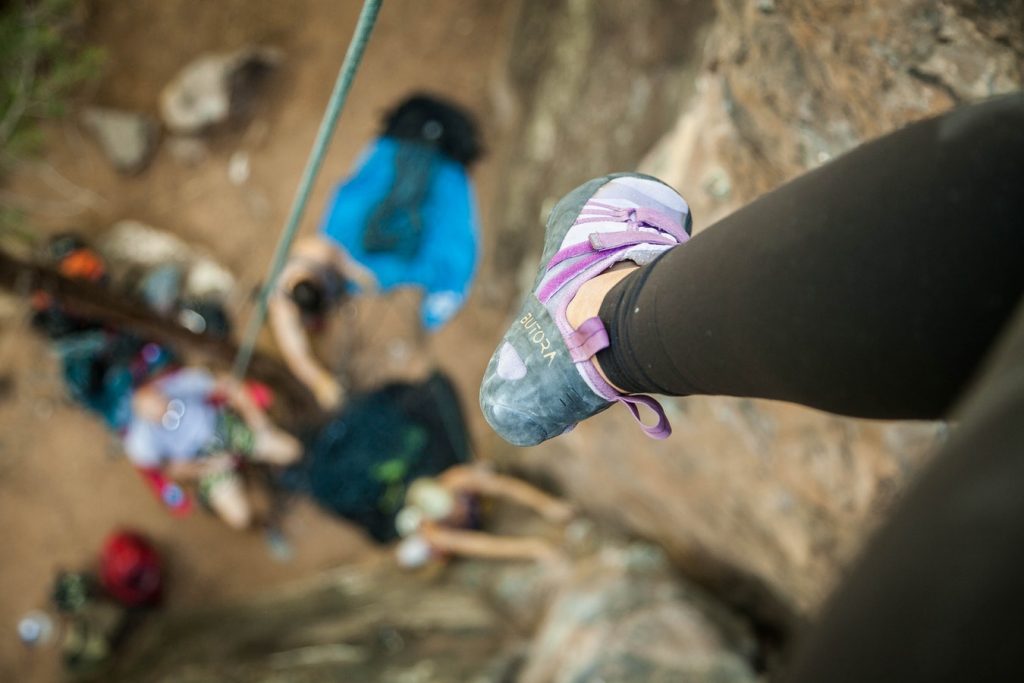 Why Every Middle-Aged or Older Person Should Climb

For the folks out there with a greater tenure on Earth than most, there is one benefit of climbing that really stands out, and it pertains to your personal survival.

That is, you’ll never have to worry about having a fall.

Yes, I know, having a fall when you’re older is something you don’t even want to think about, and that’s exactly why you should start climbing right now.

The mechanism behind this is obvious. If you don’t train your muscles into older age, they’ll deteriorate in function. This biologically unfortunate occurrence is responsible for the sheer effort it seems to take to make it though a standard day.

“I’m getting old,” you say, as you slip into a chair for a good rest after a long and arduous trip to the kitchen.

That experience is completely avoidable.

Many people use walking sticks to make movement “easier,” but that only aids the muscular degeneration. You’ll be reliant on the walking stick before you know it, with your muscles wasting away beyond all sense.

Don’t let that happen. Start climbing while you still can.

With regular climbing sessions, you’ll be training your body to adapt to a range of movement, of a nature more strenuous than your usual daily happenings.

In comparison, daily life will seem easy. You’ll be equipped for it too.

The strength and dexterity that you’ll be blessed with, courtesy of your regular climbs, will make you feel more like a fine, well-aged scotch than an old, rusty car chugging away, stalling miserably at regular intervals.

By that, I’m not just saying that climbing is amazing; I mean it literally.

That is, climbing is fundamentally different from other sports right down to the biomechanic level.

You see, what usually stops older people from enjoying sports is that sports almost always rely on a combination of large compressive forces and fast twitch movements.

Climbing doesn’t have either of these.

It doesn’t have a set minimum pace either.

If you were playing baseball, you’d have to hit the ball before it reaches the catcher, or pitch fast enough to be able to get past the hitter. There is a minimum pace required to be able to play it.

Climbing is something that you can do at your own pace, and at your own intensity, and that is what makes it so accessible.

The famous british climber Neil Gresham is proof that you dont need to be a young gun to climb hard. Neil Established Sabotage (8c+/5.14c) at the ripe age of 46 at Malham Cove in the UK. Neils new wave of training mentions a strong focus on nutrition is recommended along with strength training.