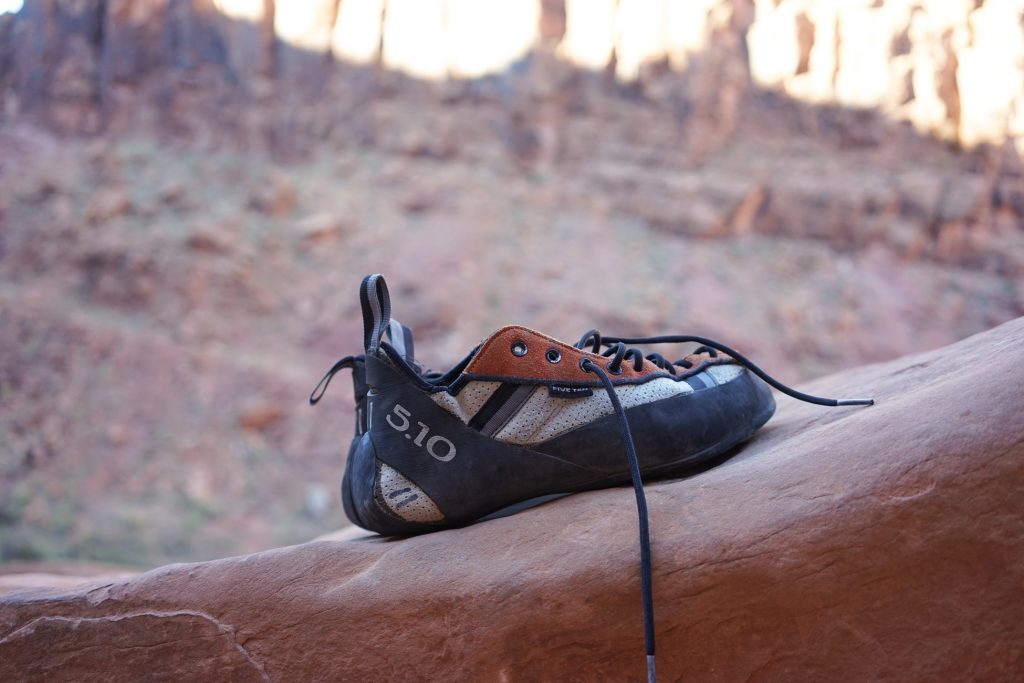 You know, there’s actually much more to the “laces vs Velcro” debate than personal preference.

There’s a whole bunch of benefits for each of them, and yes, I’ll go into all of that later in this post, but first I’m going to be talking about something much more interesting.

I’m going to be talking about an incredible strategy that is only possible with Velcro, so you can decide for yourself whether being able to do that is worth losing out on the customizable fit that laces enable you to have.

“What is this strategy you’re talking about?” you ask, “Surely the only benefit of Velcro is that it’s just quicker than tying laces?”

Yes, that’s absolutely true, but it’s what you do with that benefit that matters. That benefit is the starting point of the strategy I’m going to explain right now.

So, the benefit of Velcro is that you can put them on and take them off quicker. Now, how can you exploit this feature for maximum benefit?

It’s simple. You know how downsizing your climbing shoes can drastically improve your footwork?

Velcro shoes allow you to downsize hard without subjecting your feet to extended torture. You can slip them off between climbs to give your feet a rest.

What this means is that you’ll be able to reap the benefits of downsized climbing shoes sooner than you would if you were gradually working your way down the sizes.

And not only that, but you’ll get used to the downsized shoes more quickly, because you won’t end up with foot injuries that take time to heal. You’ll be conditioning your feet to adapt to the tighter shoes at a pace which you’re comfortable with.

Of course, this means that if you’re already used to downsized shoes, you’ll be better off with going with laced shoes to take advantage of the customizable fit that they provide. See what I mean when I said it was about more than personal preference?

Now let’s take a look at which kind of shoe is best for each kind of climber.

Should I Go for Laces or Velcro?

So, if you’re a intermediate climber I would recommend going with either slightly downsized climbing shoes, or some of those curved “aggressive” style ones, and getting them with Velcro. The customizable fit that laces offer isn’t really going to make any difference to a beginner, and that’s why rental shoes are almost always Velcro.

Beginners, however, should opt for flatter, stiffer climbing shoes. Laced shoes are, on the whole, stiffer than their Velcro brethren, which makes them a good choice if you’re looking for a good starting pair.

I’ve recommended the Evolv Royale Climbing Shoes for beginners before, and for both men and women, despite the sizing of those shoes being men’s sizing. These shoes are laced top to bottom, and have that beginner-friendly thicker sole, so comfort shouldn’t be an issue.

So, in the end, the choice between laces and Velcro comes down to whether you’re at a level of experience where the strategy I talked about earlier becomes something that you’re interested in. Beginners just want an easy jack of all trades shoe, and experts want to get a shoe which fits their climbing style perfectly, whether that’s achieved with the customizable fit of a laced shoe, or with the reduced stiffness of Velcro shoes.

Everyone else though, which is to say, the absolute vast majority of climbers, might want to consider Velcro, either for downsizing like a try-hard, or simply for the general ease of slipping them on and off.

One other thing that I’d mention though, is that laces will be superior for all-day routes where you have no opportunity to take off your shoes or swap them over. You’ll need all the comfort you can get for such an endurance-heavy task like that, so you’ll be better off with laces otherwise your feet will start to hurt from the constant pressure around the Velcro bands.

You see, laced climbing shoes are fastened over a much longer stretch of the shoe, with the criss-crossing of the laces across the eyelets distributing the pressure evenly along the top of your foot. Velcro straps, on the other hand, cause a slight sensation of tightness around the two straps which fasten your shoes.

Also, there’s one other downside to Velcro that you’ll probably not care at all about… unless it’s a deal-breaker for you.

And that’s that Velcro makes that all too familiar “Scrrrrrrch” sound whenever you fasten or unfasten the straps. If you’re popping your shoes off after a late climbing session, or if you’re off out early, then this might be a problem depending on if there’s anyone around who might hate you for waking them up.

Lastly, I wouldn’t worry about whether Velcro or lace shoes will wear out more quickly. That’s going to be down to the build quality of the overall shoe, because it’s really not going to be the fastening part of the shoe which fails first.

Yes, it is true that laces are more easily implacable than Velcro straps, but laces are thinner, and so they’re more prone to snapping than Velcro. Not that it matters anyway, because it’ll be the sole or edges of the shoe which wear out first, and that kind of thing can’t be helped if you’re using them continually.

Besides, by the time they’ve worn out, you might want to downsize more, or opt for a more aggressive shoe. If you do, then get Velcro ones so that you can use the trick I talked about earlier in this post.

You’ll be glad you did.