Back when I first heard about half ropes, I just didn’t understand what the point of them was.

There I was, searching around on the internet, reading article after article and getting more confused by the second.

The funny thing is, half ropes are amazing, and they’re actually really simple to get your head around, despite what people think.

I’m going to give you the lowdown on half ropes, and when you see just how great they really are… you’ll never want to climb with a single rope ever again.

Let’s start with the basics. Let’s take a look at what half ropes actually are.

What “Half Ropes” Are

The name is kinda misleading, which is why people often just call them “double ropes” instead.

You could argue that it’s a name which better captures the essence of what they are. They’re ropes used in pairs, so

Unfortunately, people also use the name “double ropes” to refer to twin ropes, which are something else entirely. They’re more of a specialist piece of equipment, so they’re nothing you need to worry about unless you’re into some hardcore Alpine or ice climbing.

So, let’s end all the confusion right here. From now on, we’ll just call half ropes “half ropes,” and we’ll call twin ropes “twin ropes.”

Right, now that that’s out of the way, we can take a look at what makes these half ropes different than your standard single climbing rope.

How to Spot Half Ropes

Not paranoia-inducing levels of “this is never going to break my fall,” but they’re still visibly slimmer than normal climbing ropes.

You’re looking at 8-9mm diameters for half ropes, while your average single rope is 10-11mm.

Of course, they look much skinnier than “a couple of millimeters’ difference.” This is because diameter affects thickness much more than you’d expect.

Don’t worry though: These ropes are easily strong enough to take your fall, even if you only had one of them. They’re made that way on purpose.

Just don’t try using twin ropes by themselves. Those are not rated for single use, and you will die if you try.

Speaking of not dying, if you want the absolute safest climbing setup possible, as I’m sure you do, then the biggest difference you can make is to switch to half ropes.

Let’s take a look at the force ratings to see why.

How Strong Are Half Ropes? 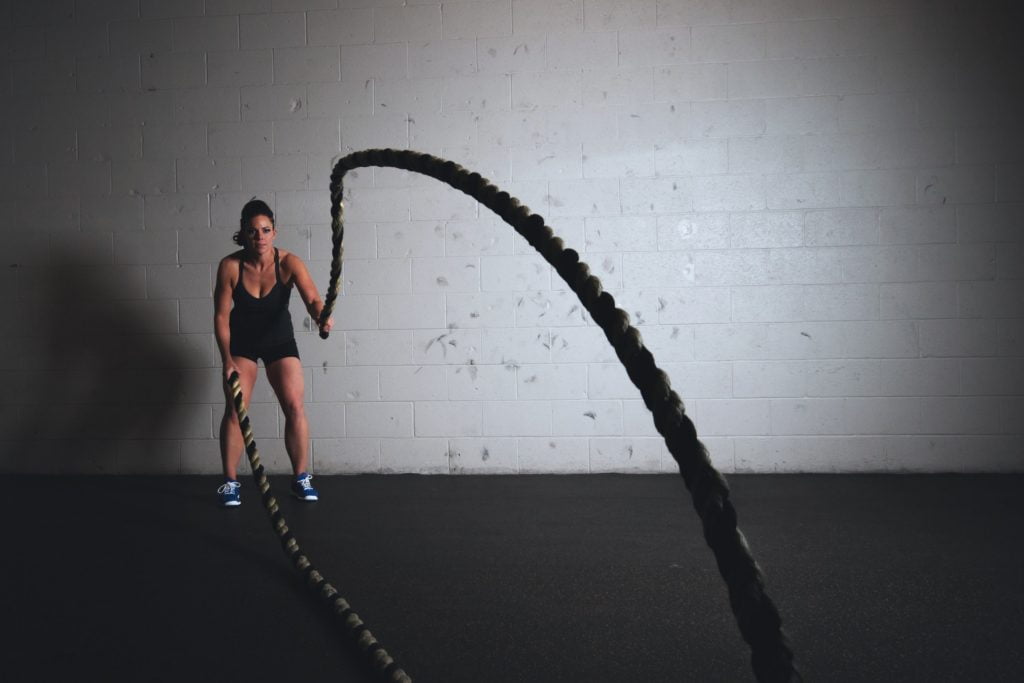 They’re rated to be able to take a maximum of 8kN of force, while normal climbing ropes can take around 12kN.

If they both catch you equally, you’re looking at 16kN of maximum force. That’s a third stronger.

They won’t really be catching you equally though. It’s more likely that one rope will be doing most of the work, while the other helps out a bit.

Here’s the thing though: Even if one rope took the brunt of a massive fall – and I mean massive – and it somehow broke, then the other rope would still catch you for sure.

Because that second fall would be really short.

You’ve already fallen most of the way, so that little bit of extra distance will barely strain the second rope.

It’s obvious, I know – two ropes mean two chances – but it’s still worth mentioning because we, as climbers, tend to take the reliability of our safety equipment for granted.

Sure, good equipment is reliable; that’s what we chose it for. But let me ask you, what would happen if that one piece of equipment you’re relying on did fail, for some bizarre reason?

It’s worth it to have a backup. The principle is to make your equipment “redundant,” which is a fancy way of saying “if it breaks, I won’t be dead.”

Half ropes give you automatic redundancy. Pretty neat.

Why Should I Be Using Half Ropes?

Other than the whole extra safety thing that I just talked about, there’s a few more huge advantages to using half ropes.

First of all, I’d say the absolute best thing about half ropes is that:

…if you use them properly, that is.

Rope drag is annoying. It’s that resistance on the rope you get towards the end of a climb that’s had some sideways movement earlier on.

It happens when there’s a bit of zigzagging between quickdraws going on. The rope can get so hard to pull through that you end up messing with the rope every time you need some slack.

On harder climbs, it can be the difference between making it or failing. An unexpected, suddenly taut rope can even pull you off at the crucial moment, as if you had an inattentive belayer who was slacking on their “slacking.”

Half ropes let you separate the left and right sides of a climb by clipping in appropriately, so an interesting wandering route doesn’t become a boring, rope drag hell. To do this, you’ll have to make sure that you only clip in with one rope on one side, and only clip in the other rope on the other side, so that both ropes take separate, straight paths to victory.

Another great thing about half ropes, is that:

However, the single-strand rappel means you have no way of getting your rope back, so it’s never worth it unless you’re in some weird kind of emergency.

The rope’s going to have to be twice the length of the climb to be able to pull off a double-strand rappel without rapping off the ends of your rope.

You might think that it wouldn’t even be possible to make that mistake, but I assure you, it really is. It usually happens in a scenario where you’re double strand rappeling when can’t see the ends of the rope on the floor.

Since it’ll pretty much be guaranteed to happen eventually if you make a habit out of rappelling blind, many climbers tie stopper knots in the ends of the rope.

You can’t rely on this alone. It’s so easy to forget, and besides, you’d still end up awkwardly stuck if this is what saves you. Sure, they’re so worth having, but there’s more you can do than purely rely on stopper knots alone.

The only way to be absolutely sure that you’ll be able to rappel all the way to the bottom, is to use half ropes. Even an absurdly long single rope isn’t a guarantee, because there’s always the chance that you used more than half of it to climb up, which means you’ll run out when you double it up to rappel back down.

However, when you use half ropes, the rule of thumb is that “if you made it up, you can make it down.” It’s actually impossible to run out of rope on the way down because you’ll be joining both ropes together in a double fisherman’s knot, rather than just doubling one of them up.

Finally, the skills you learn from using half ropes make you a more versatile climber, meaning:

You Can Climb as a Party of Three

This is something that obviously cannot be achieved with a single rope.

Half ropes basically allow you to belay two climbers at once. It’s pretty much the same as when you belaying one climber with them.

However, you can build on this feature to create a much better way for three people to go climbing together using half ropes.

In order to do this, you’re going to need three half ropes.

The idea is simple. All you have to do is set yourselves up in a triangle, so that there’s two half ropes tied to each climber. That way, you can switch from leading, to belaying, and back again whenever you need to, without having to swap ends.

At first, one of you will be leading while the other two are on belay.

The leader will be clipping in with one rope for the bolts on the left, and the other rope for bolts on the right, like I mentioned before. This stops you ending up with that zigzagging of rope between bolts that’s all too common with a single rope on a wandering route.

What this means is that without half ropes, it’s possible for the second climber to fall really far, or even take a ground fall. Don’t try climbing as a three without half ropes unless you really know what you’re doing.

Okay, so, your lead climber is at the top; they’re tied in, they’re on belay, and your second is ready to go.

You’ve now got two choices. Either, the lead climber belays both of the other climbers from the top at the same time, or you take the safer but slower option and make your way up one at a time.

“Why would anyone choose the slower option?”

Second, if you belay two climbers at once, you’re only going to be using one half rope for each of them. As you might imagine, this nullifies the safety bonus of using half ropes in the first place.

That being said, there’s nothing wrong with doing this quick method if you’re a confident climbing trio. It’s becoming more and more common to do it this way, so there’s nothing radical about it.

The other way – the safer way – is to have both other climbers belay the second: One from the bottom, and one from the top.

In order to do this, your second climber is going to have to unclip the top rope at each bolt, and clip in the bottom rope in its place.

To make your way down again, you can simply just lower each other like you normally would, and the last one down gets the option of a cheeky rappel if they want to. The sky’s the limit.

One last tip before I go: make sure you buy two different colors of half ropes.

That way, you can call, “Slack on blue!” or, “Take in red!” and so on. It makes life so much easier for your belayer.