They look ridiculous when you first see them… and then they grow on you.

This happens especially quickly when you get “belayer’s neck.” You’ll do anything to find a solution, because neck injuries are awful.

I’ve got one right now. It’s on the left side, at the back. It’s not from belaying, but it’s still my own fault.

Anyway, belaying glasses allow you to look up without having to actually tilt your head up, and, as you’ve probably already gathered, keeping your head in a normal position doesn’t cause neck pain.

It’s that simple. That’s all they do.

How they achieve that though, is down to some clever design.

Essentially, this is how they work: 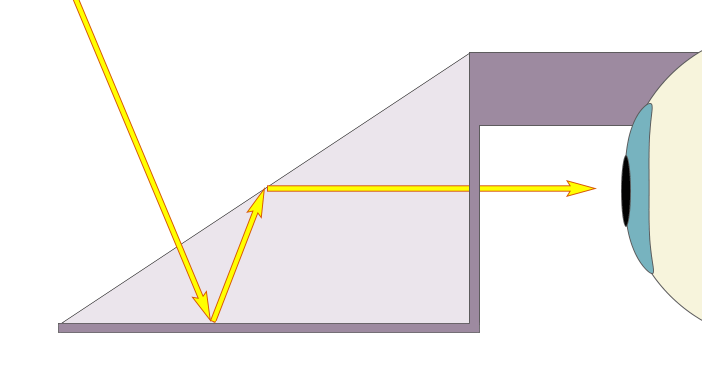 Yeah, instead of explaining how total internal reflection happens at a medium boundary when the angle of incidence, with respect to the normal of the surface, is at an angle larger than the critical angle, I thought I’d spend five minutes in Photoshop instead making this really strange diagram.

Well, you get the idea. Light bounces around so you can see upwards by looking forwards. Because it bounces twice, everything isn’t backwards like looking through a mirror. Pretty neat.

Since they all work exactly the same way, belaying glasses aren’t going to be too different from one another. You’re not going to find any that have some fancy new features that render all the other products out there obselete.

However… that doesn’t mean they’re all equal. It means that the best belaying glasses will be the ones that meet two key criteria

1. They Need to Have Good Optic Quality

Now, a decent pair of belaying glasses is never going to cause you eye strain, but some of them have strange design choices such as large frames or sub-par optics.

It’s easy to see how blurriness, distortions, and imperfections in the prisms can easily cause eye strain and headaches, but what is often overlooked is the “tunnel vision” effect of oversized frames, and the nauseating effect that has on you.

Motion sickness happens pretty quickly for most of us when the movement of our vision doesn’t appear to match our bodies’ movements. With belaying glasses, side to side movements are especially prone to causing motion sickness.

…that is, if your peripheral vision is blocked, and your vision is completely “tunneled in.”

That leads onto the second criteria:

Peripheral vision is your “outer edge” of your vision. With a good pair of belaying glasses, you’ll be able to look out of them normally to do whatever you need to do without having to take them off.

If you’re extremely prone to motion sickness like me, you can flick your eyes out of the prisms to readjust your position when you need to, and then flick your eyes back into the prisms to resume watching the climber. This is especially useful because it allows you to keep your head still, which will put yourself beyond the possibility of getting any motion sickness.

That being said, you only need to do this while your brain adapts to using belaying glasses. Really, the amount of detail I’m going into here is overkill, and it’s more likely that you’ll experience no problems at all after a few sessions of using them.

3. They Should Be Durable

Because many of them are notorious for falling apart. The prisms are attached to the frame with adhesive, and in a fair few products it simply isn’t attached strongly enough.

Not to mention, climbing, or even hiking to the climb, isn’t a particularly gentle activity. Most belaying glasses come with a carrying case to protect them, but all that movement is still going to wear down the adhesive over time if it’s not done properly.

Funnily enough, there are actually belaying glasses out there which have too much adhesive, which seeps onto the prisms and messes with the optic quality, causing blurriness around the edges.

So, now that you’re in the know, let’s take a look at the best overall belaying glasses:

Ah yes, Y&Y. It’d be impossible to talk about belaying glasses without talking about Y&Y. They’re easily the most popular brand.

Their flagship product is the Y&Y Classic. The frames on that one are flexible and they’re made of metal. It also has silicon pads for the nose rest.

That’s right – it’s pretty much the same as you’d expect from a high quality pair of actual eyesight glasses. The only difference is they make you look like you’re a psychologist from the future, rather than an ordinary psychologist. 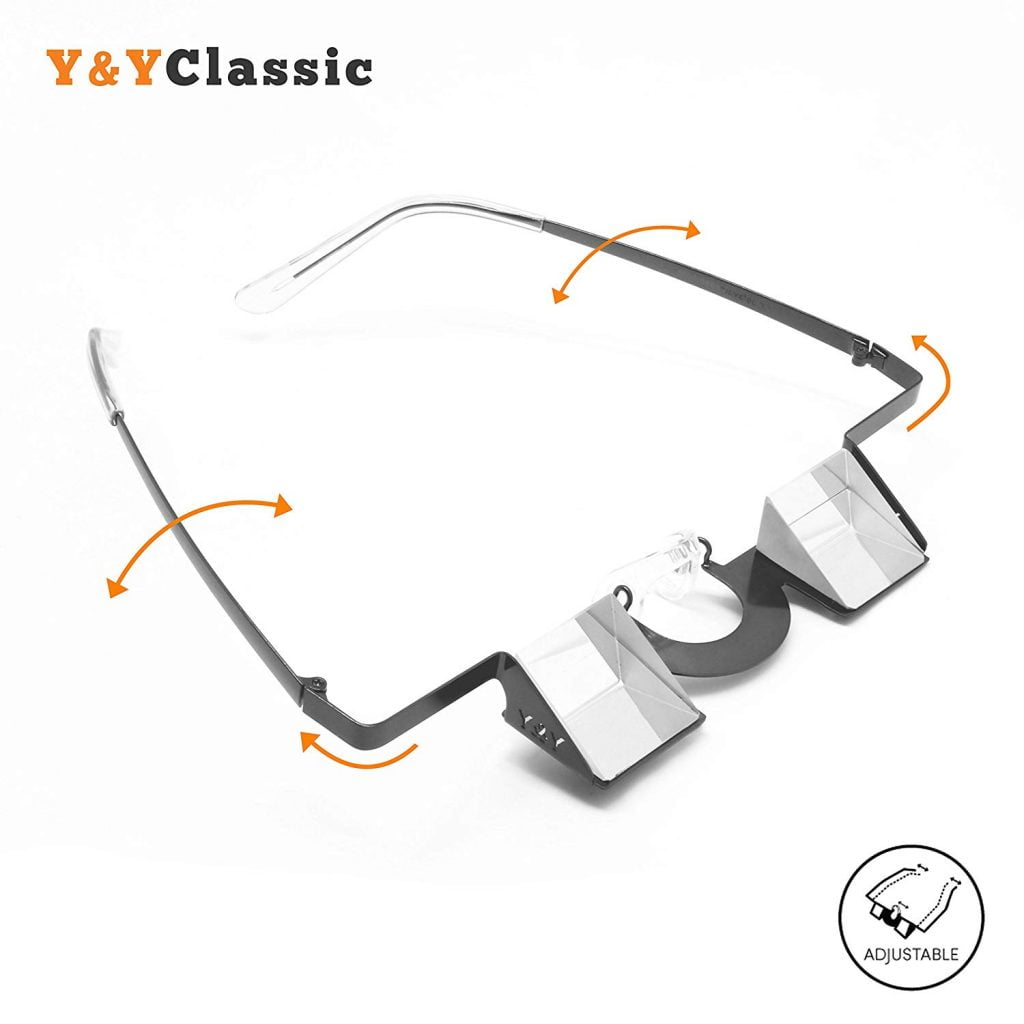 Anyway, everything is fully adjustable, as you can see. 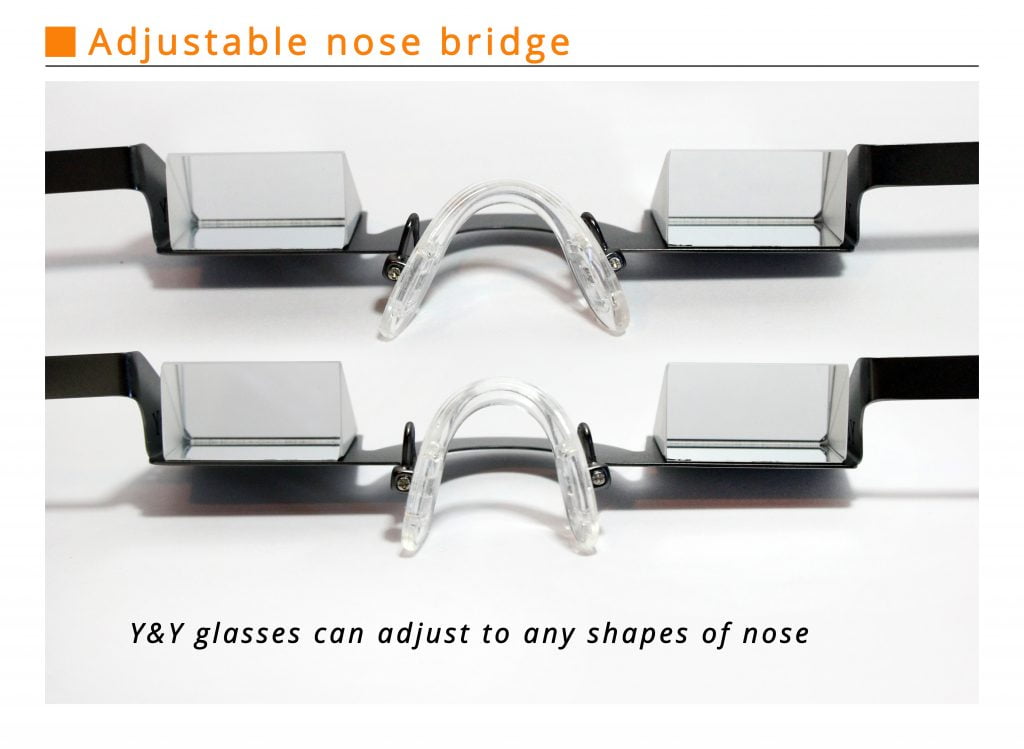 They come in a whole load of color options, and you get all this stuff with it too: 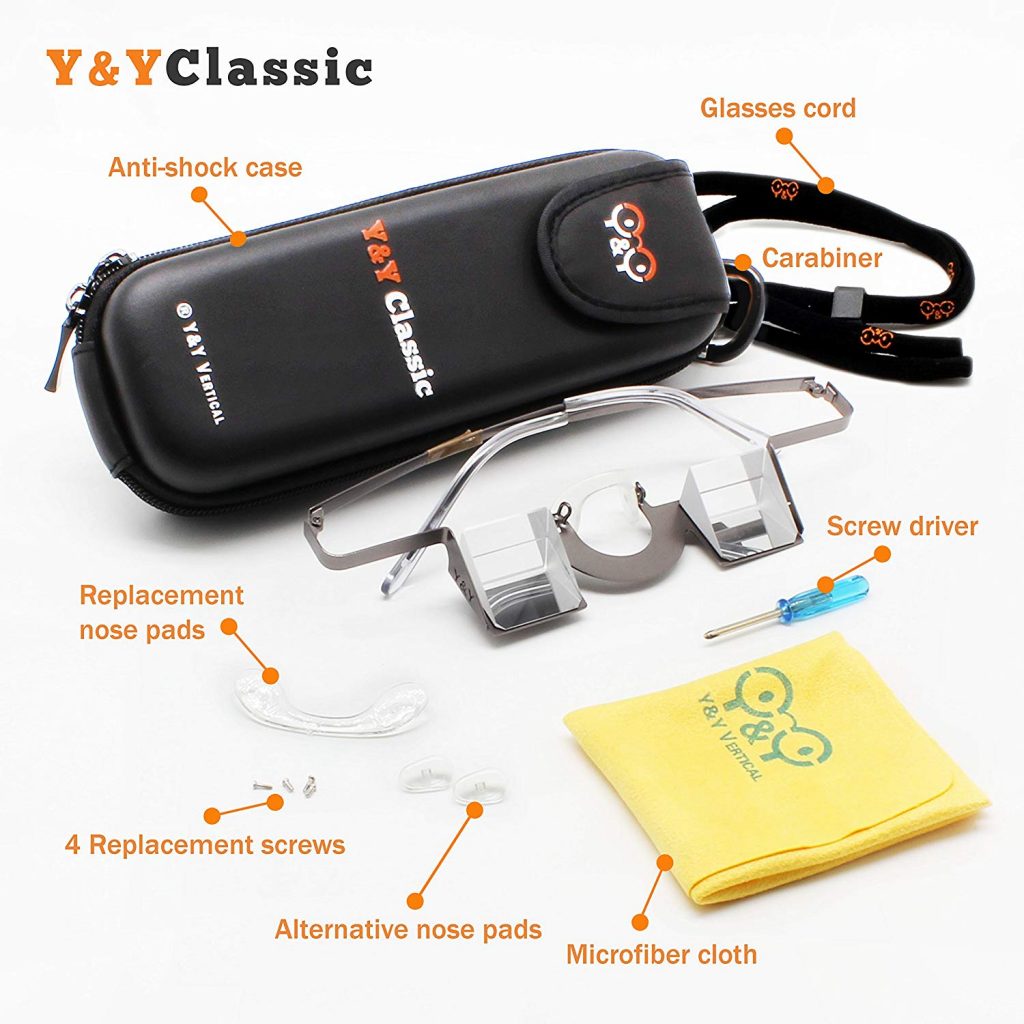 You can click here to view the Y&Y Classic on Amazon. However, these aren’t the ones which I’d say are truly the “best overall.”

Why? Because cost is a factor. Sure, if you want the absolute most premium product you can get, then go for this one, but for everyone else, there’s a sneaky alternative that’s definitely worth considering.

You see, Y&Y do a cheaper version called the “Plasfun.” As you might have guessed, it’s made of plastic rather than metal. 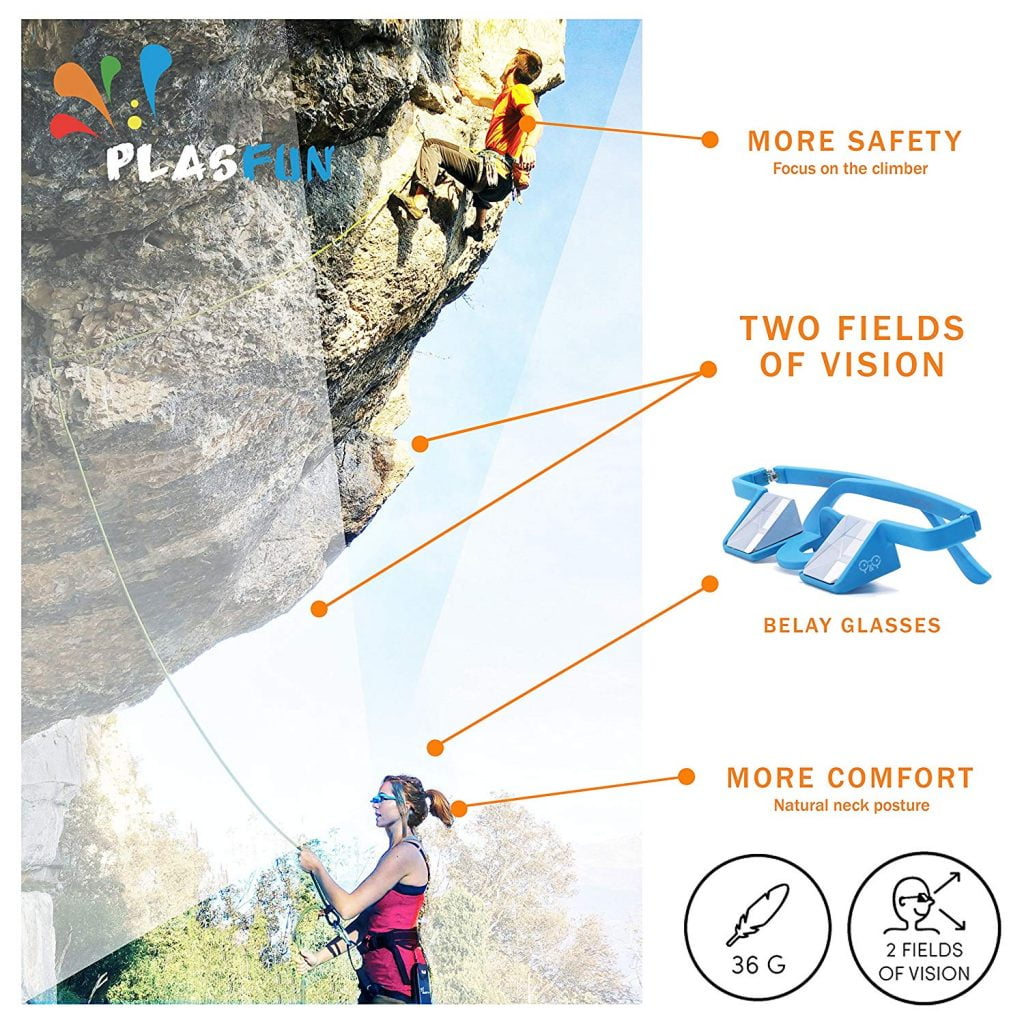 It’s a super popular product, and their most well-known one.

However, even this is not the version I’d recommend.

Sure, they’re a great product, but I recommend going even lower. Go for their most basic option: the Y&Y Plasfun Basic.

“Why?” The product description speaks for itself:

This is a basic version from BELAY GLASSES collection: less accessories, more basic glasses case, the prisms are the same optic quality.

That’s right. You’re not missing out on anything that actually matters.

You can forget about the case though. It’s absolute trash. Just use any old sunglasses case you have lying around.

Speaking of which, all Y&Y belaying glasses can fit over regular glasses and sunglasses, though there’s actually a special version of them that’s specifically designed to clip onto other glasses, called the “Y&Y Clip-Up.” We’ll talk about that in a second.

However, the last thing I want to say about the Plasfun ones is that if you really want a good case for them, or if you really want color options, then go with the Plasfun rather than the Plasfun Basic. The case is designed so that the glasses won’t rattle around while you’re transporting them. It also has a handy little carabiner so you can clip it to your harness.

Anyway, let’s move on to the best belaying glasses that are specifically designed for people who already wear glasses:

The Best Belaying Glasses for Those Who Already Wear Glasses: The Y&Y Clip-Up. 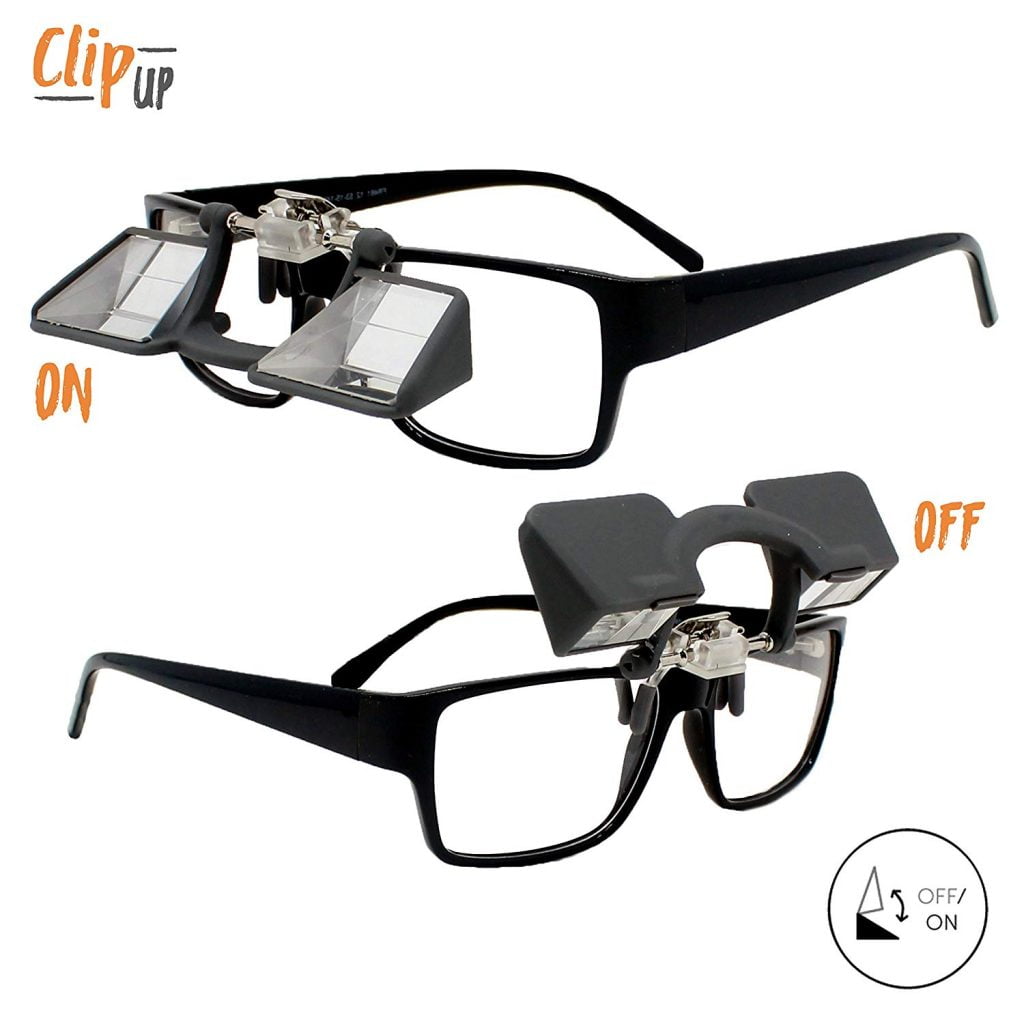 Nice, right? They can transform from “non-belaying mode” to “belaying mode” and back again at will. Now you can truly feel like you’re a technologically-enhanced belayer from the future.

Of course, they work on sunglasses too, if you want to take that look even further.

What’s great about these is that they’re designed so that you can actually grab the prisms themselves and lift them up or down. You don’t have to worry about getting them chalky or smudged or anything. 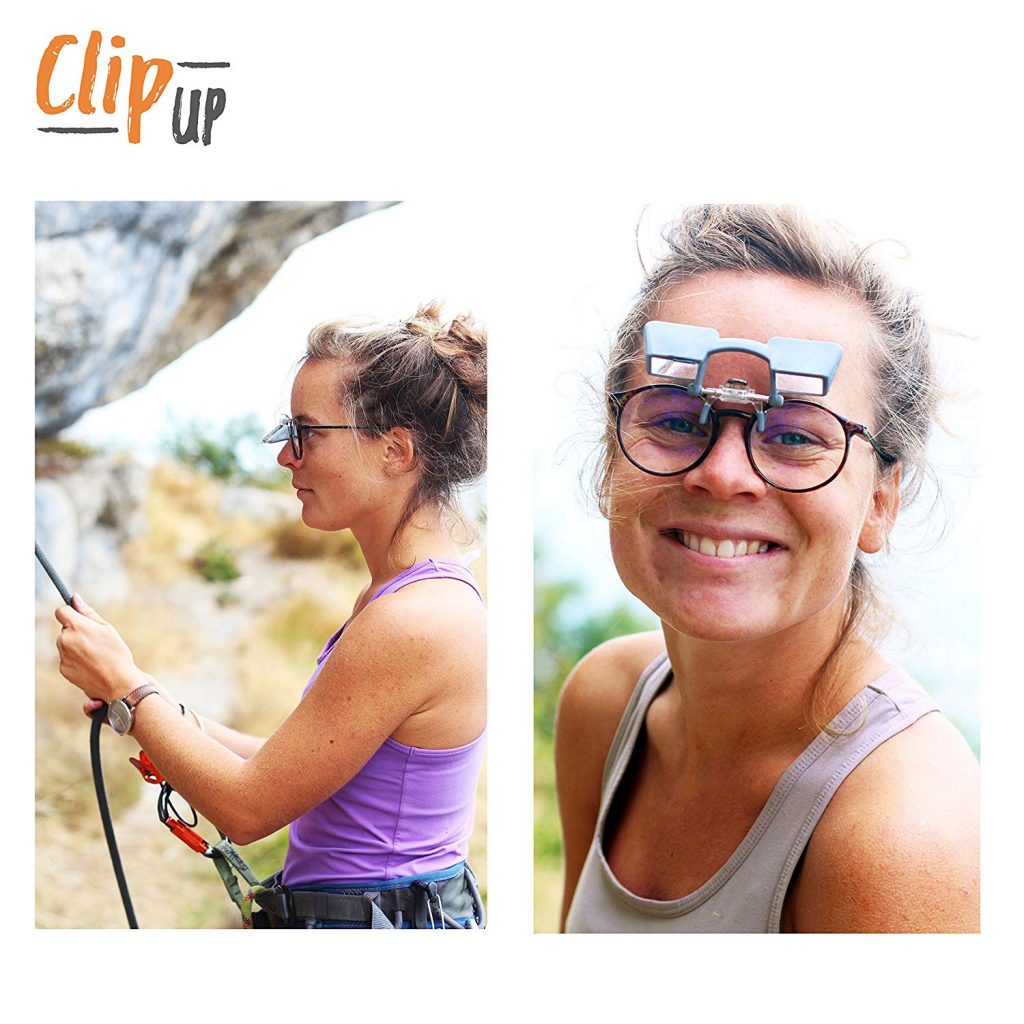 This thing clips on strongly. It’s not going to rattle or anything.

And don’t worry, the actual prongs of the clip which grab the glasses have silicon tips so they won’t scratch your glasses.

There’s also a stopper just below the prisms where they face the lenses of your glasses, so it’s impossible for there to be any scratchy glass-on-glass contact going on.

One Size Fits All

They’ll fit any type of glasses you can think of. Yes, even those really curvy skiing shades.

That being said, their only downside is that they can tilt your glasses forward a bit if they’re not heavy enough or tight enough. After all, you do have two small wedges of glass sticking out in front of your face.

Don’t worry though, there’s some anti-slip silicone ear hooks that you can put on the ends of your glasses. You can see them here: 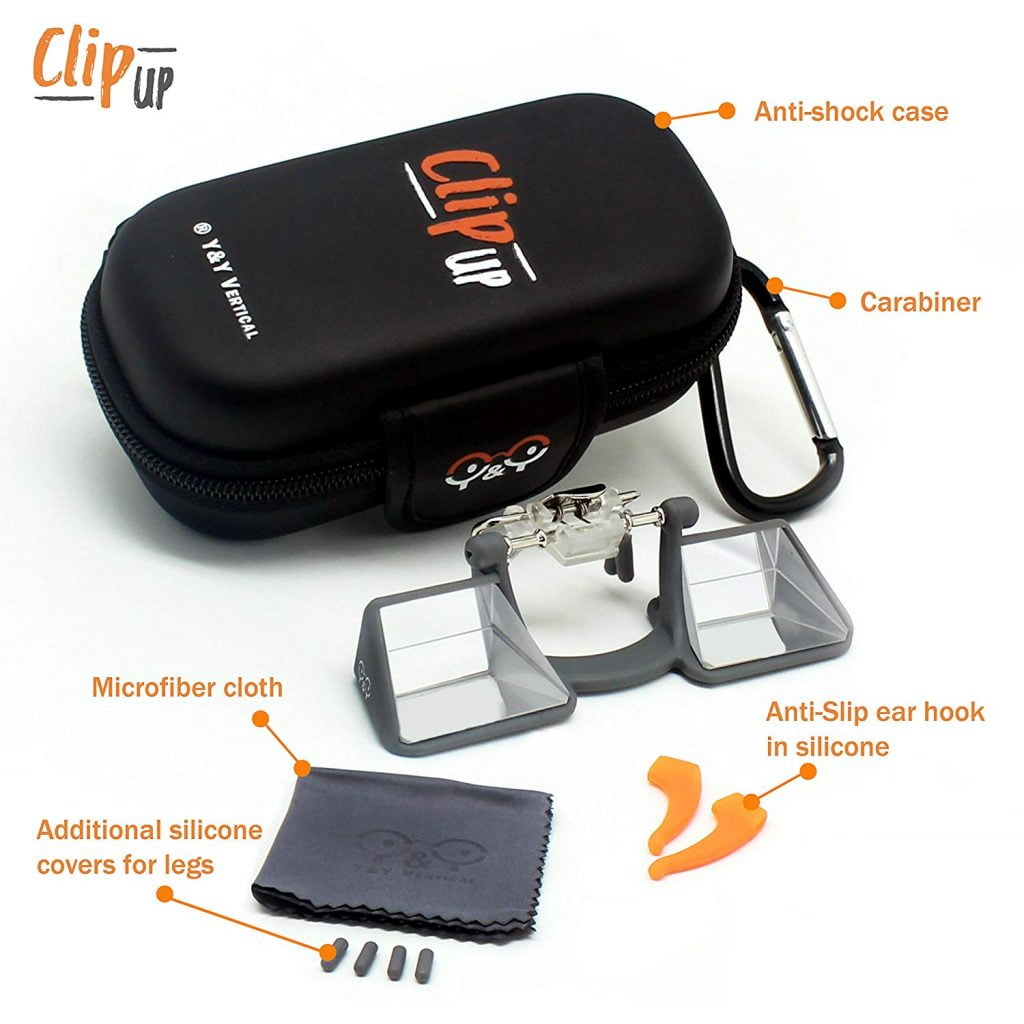 And yeah, the case is actually good on this one. It’s designed to hold the belaying glasses securely so they won’t rattle around while in the case. Just like the Plasfun, it has a handy little carabiner so you don’t need to root around in your rucksack for them when you need them.

You can click here to check out the Y&Y Clip-Up on Amazon.

So, I’ve already covered the premium choice and the budget choice for belaying glasses, so there’s no need for an extra section on those. Instead, I want to show you an alternative to the Y&Y Clip-Up for those of you who have a non-standard interpupillary distance (IPD):

The Best Belaying Glasses for Those with Wide-Set or Narrow-Set Eyes: The Belay Optics 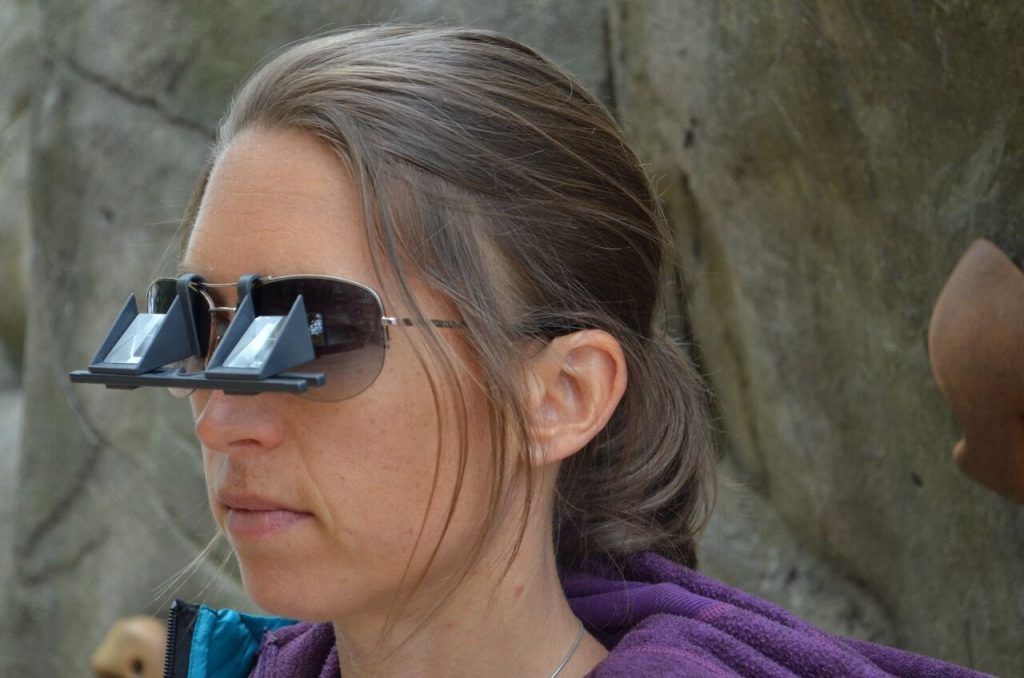 Because of the unique, fully-patented, fully-adjustable design.

You can simply have them as wide apart or as narrow as you like, because they just slide along the bottom rail.

Remember what I was saying before about eye strain? Just imagine being slightly cross-eyed or “whatever the opposite of cross-eyed is” for hours at a time. That’s practically a recipe for eye strain and tension headaches.

These ones clip onto your glasses snugly as well. Some people have even used them as “lazy reading glasses” by clipping them on upside-down. The clips are plastic rather than metal, but they still do their job just fine. 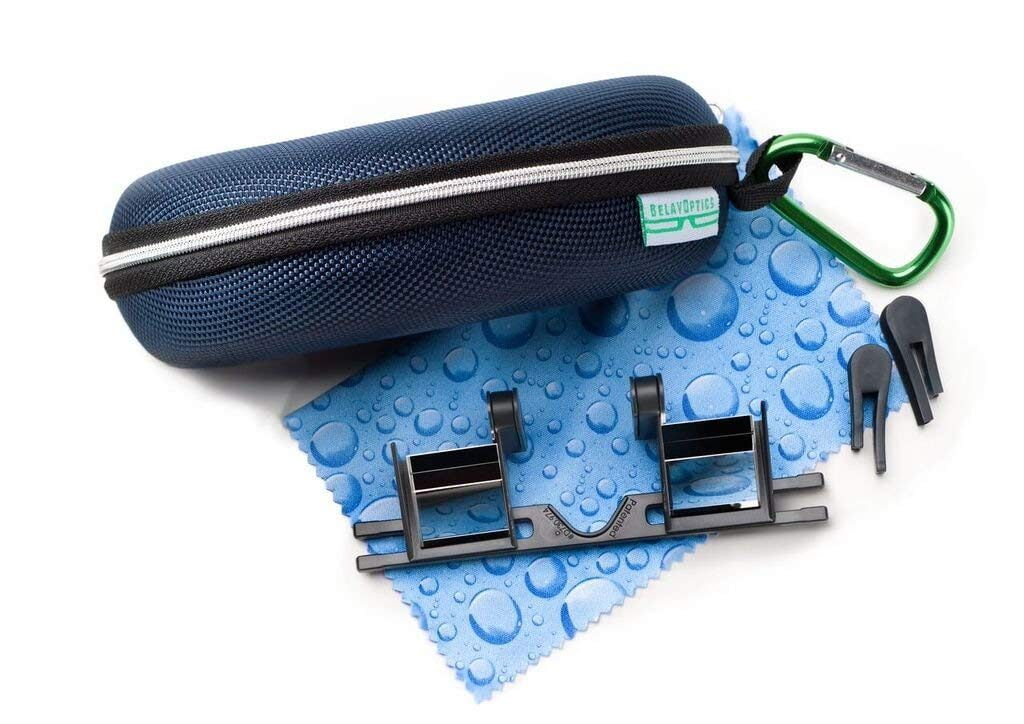 Finally, they also come with a decent case, though it’s not quite as nice as the double-closing, shock-absorbent Y&Y one.

Nethertheless, the actual glasses provide something that the Y&Y ones don’t: adjustability. That’s what makes these ones worth it if your interpupillary distance, the distance between your eyes, is larger or narrower than average. You can click here to view the Belay Optics adjustable belaying glasses on Amazon.