It’s essentially a more versatile version of a sling. The only difference is that you’re going to have to tie a knot in it yourself, but that is easily done with a bit of know-how.

I’d recommend sticking to the standard knot that climbers use for tying webbing: a water knot with 4-6″ of tail on each end.

Some might say that having that much tail on a water knot is unnecessary. It is true that it takes 800 cycles or so for a 3″ tail to pull through, but “better safe than dead, right?”

Jokes aside, that estimation assumes that the water knot is tied perfectly… but in reality? It’s possible that there might be some extra slippage.

That’s what the extra long tails are for. Some people even tie stopper knots on the tails, but I’d argue that you may as well just tie a double fisherman’s knot at that point.

Of course, the reason why the water knot is better for tying webbing is that it’s ridiculously easy to inspect.

They’re also useful because they can actually be undone again, unlike the double fisherman’s knot. If you make a mistake, you can just undo it and re-tie it again.

If you need a loop on one end of the webbing, you can just do an “overhand on a bight,” where you simply do your standard, everyday overhand knot with a loop of the webbing near to the end.

There you go. If you learn both if these knots then you’ll be granted the ultimate freedom in climbing…

That is, the freedom to create your own anchors.

What this means is that you can top rope climb or trade climb anywhere that has a suitable object to create an anchor with.

A good, strong, living tree is your safest bet, even though it’s not the most ethical choice. Webbing will eventually break its way through tree bark if it takes enough falls, which will kill the tree if too many climbers do the same.

I’d say, if the tree looks unharmed then you’ll be fine to use it.

However, if it looks like it’s been used as an anchor a few too many times, whether that’s because there’s already a whole bunch of webbing around it, or you clearly see some suspicious damage to the bark, then give it a miss.

“What would you use instead, then?”

That way you’ve got redundancy for each of your anchors.

Redundancy simply means that you have backups. It means you’re not trusting your life to the hope that your one, single safety measure won’t break.

Of course, you’ll need to use more webbing if you’re tying it around multiple rocks, than if you were to use a tree. Don’t worry though, it’s pretty cheap stuff compared to slings.

You can usually make four 120cm slings per roll of webbing, for about the same price as buying a pre-made one.

So, all you need now is to get some good, reliable stuff, like this one: 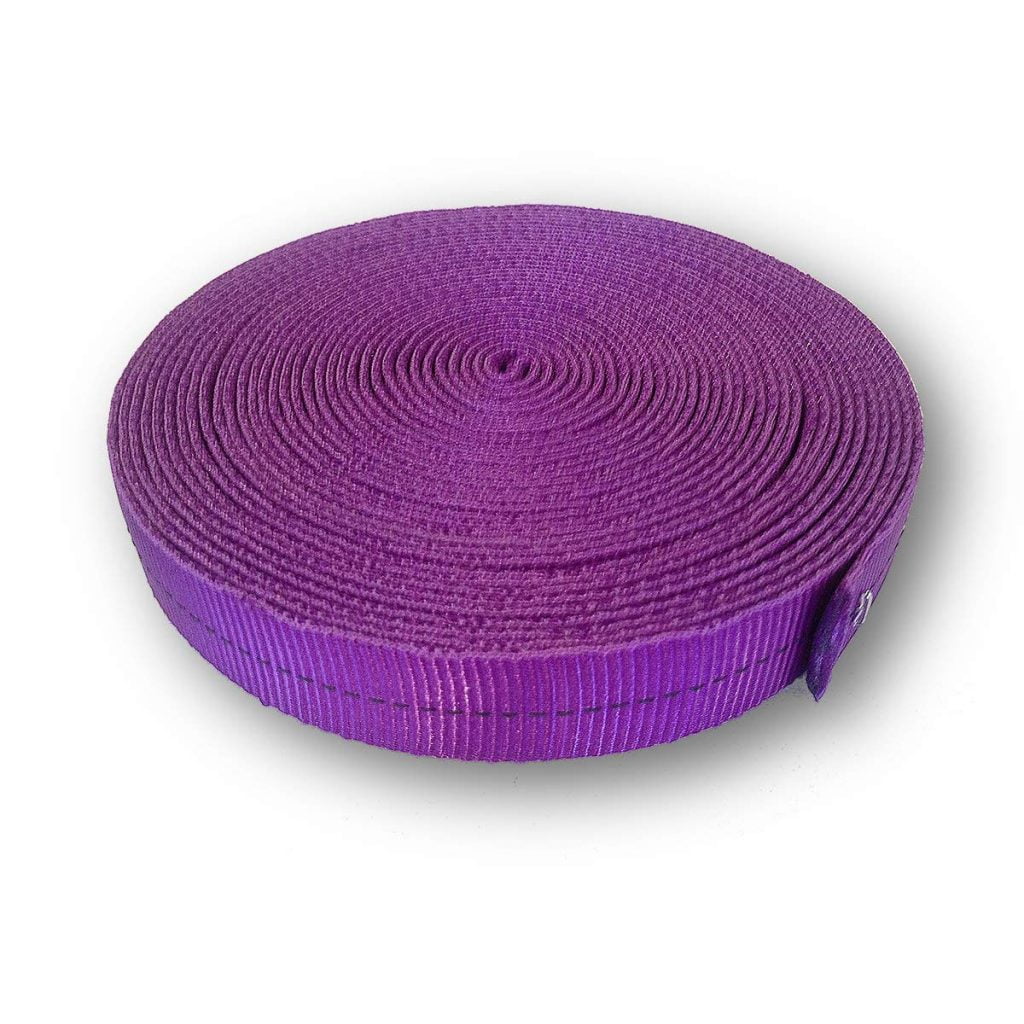 “Knot-ability” is really important for climbing purposes, because the knots you’ll be tying will be the only things keeping your loops of webbing intact.

It’s really hard to tie knots with flat webbing. If you’ve ever tried it, you’ll instantly see what I mean.

They leave big gaps in the knot that you can’t get out no matter how tightly you pull. Not good for peace of mind… even if they might hold up well enough.

Why It’s So Reliable

This webbing is made on a shuttle loom, rather than a needle loom.

The difference? A needle loom produces material significantly faster, at the cost of quality.

In fact, you can easily spot if webbing has been made on a needle loom because you’ll see that it has little bumps along the right side of it. That’s because needle looms produce one woven edge and one, slightly uneven, knitted edge.

The unevenness of the knitted edge means that tension applied to the webbing won’t be distributed evenly throughout the material. As you can imagine, that’s something that you want to avoid, considering that you’ll be trusting it to break your fall without breaking in half.

The OmniProGear Tubular Webbing, however, has a breaking strength of 4,000 lbs.

That’s crazy strong. Almost as strong as a metal carabiner.

To top that off, it even has a special cross-lock stitch to make it extra secure.

It’s safe to say, you’re not going to be worrying about whether it can handle the stresses of climbing or rappelling. You’ll have plenty to work with too, because the roll is 30 feet long.

The OmniProGear webbing is UIAA certified, measures one inch across when pushed flat, and comes in a vibrant purple color. Click here to view this amazing stuff on Amazon.

Now let’s look at some webbing with more color choices, for the more fashion conscious climbers out there.

The Best Webbing for Those Who Want More Color Choices: The Country Brook Design Tubular Webbing

This one comes in a whole bunch of colors, as you can see.

You can click the pictures to view each color option on Amazon: 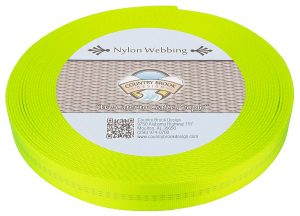 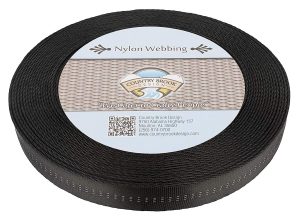 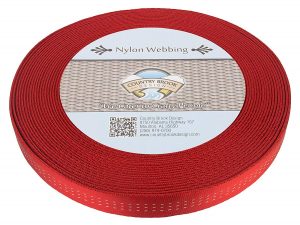 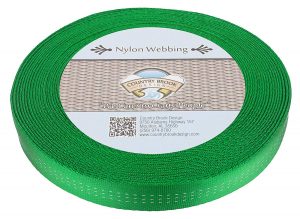 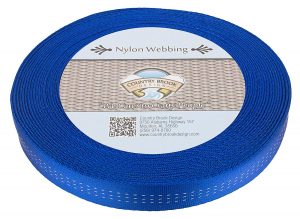 As for the webbing itself, it’s one inch wide, comes in 30 yard roll, and has an average tensile strength of 4,900 lbs.

Yes, that is more than the OmniProGear one, but the manufacturer recommends that you don’t try to put anywhere near that much tension on it.

That being said, it’s UIAA certified, and you’ll never reach forces like that in climbing anyway, so it’ll make no difference in what you’ll be using it for.

The only downside is that the webbing may contain factory splices on some of the rolls. All you’d do is just avoid using a section of it that’s been spliced, but it is true that you’ll probably lose out on a few inches of webbing if that’s the case.

This webbing also comes in purple, by the way, in case you like the look of this one more.

But if you’re dying for some webbing in either olive drab green, hot pink or orange, then look no further than:

The Rock N Rescue Tubular Webbing: for Even More Colors 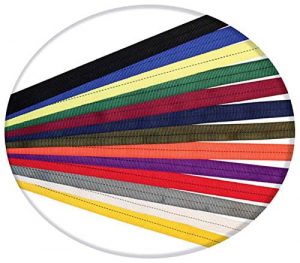 You can click here for olive drab green, here for hot pink, and here for orange. It comes in almost all the other colors too.

This webbing is not quite as strong as the Country Brook Design one, being able to take 4,000 lbs of tension much like the OmniProGear one, but it doesn’t have that extra little bit of attention to detail that the OmniProGear webbing has either.

That being said, this webbing will do just fine for climbing purposes. The extra safety measures are just for peace of mind, but they’ll never really be useful in practice if you’re using webbing properly.

However, it’s also a little cheaper than the others, at the cost of getting 5 feet less of it in the roll. It comes out to be a little cheaper per foot of webbing than the Country Brook Climbing one, and about the same as the OmniProGear one.

You can click here to view the Rock N Rescue Tubular Webbing on Amazon.