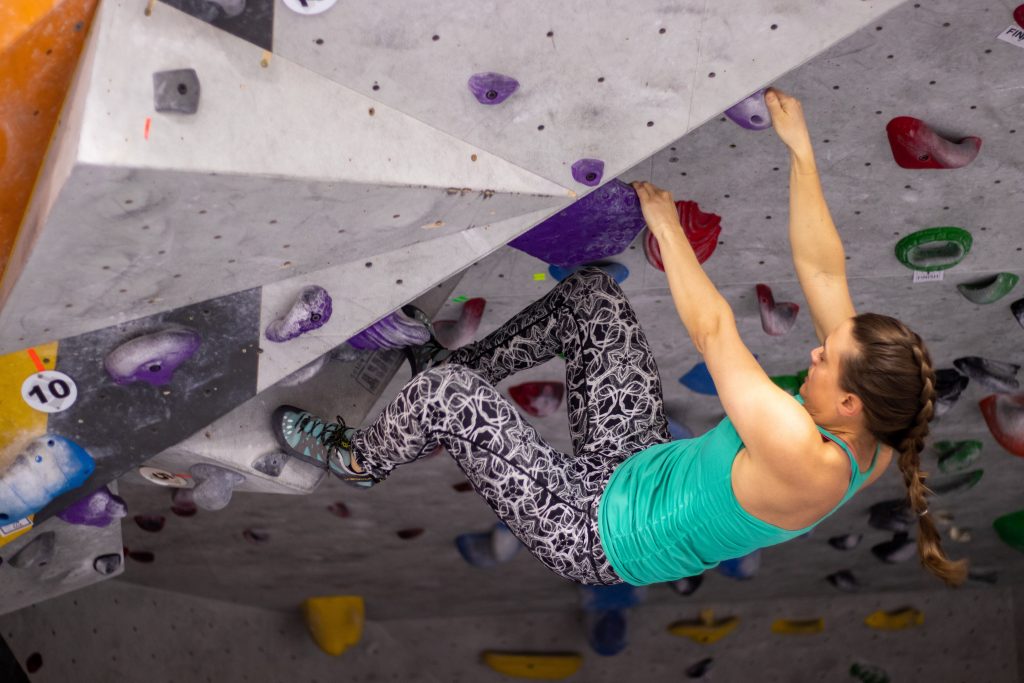 So, you’re probably googling this because you need to know this stuff to be able to climb unsupervised. Either that, or reading this anyway because you value your own personal safety.

In any case, I’m going to cover everything you need to know in order to be able to climb at your local bouldering gym unsupervised.

Before I get into it, I just want to say first, that the single best thing you can do to get a feel for the standard etiquette for indoor bouldering is to observe what the other climbers do at your local bouldering gym.

Have a look around while you have a rest in between climbs, at a safe distance from any would-be falling climbers, and observe these things in particular:

Keep Away from Climbing Climbers

This one is for obvious reasons, but I’m going to spell it out:

Don’t be anywhere near where a climber could fall.

However, here’s something less obvious:

Watch out above you when you’re moving around the place. There are often walls that lean back quite far, so the fall zone is extended more than you might think if you didn’t look up.

As standard practice, look up often when moving around.

Another aspect of this, is the distance you keep between yourself and other climbers when you’re both climbing in some proximity to each other.

Again, check the distance that other climbers in your gym keep from each other when attempting routes, but as a rule of thumb, make sure there’s no way you could crash into each other if one or both of you fell.

When you fall, you take up a little more space when you stumble, so take that into account. You don’t want to stumble into the fall zone underneath another climber.

When you’re climbing, you’re going to be falling at some point if you’re doing it right.

“If you’re doing it right?”

Yep, because if you never fall off, then you’re holding back too much. Go and have fun, but make sure you know how to land properly when you fall.

The way that you do that, is as follows:

As for the kind of falls you can end up taking with the more advanced routes, you can check out this guide Jamie wrote about them.

Keep Your Stuff Out the Way

Basically, keep everything you’re not using in the lockers or cubby holes.

Of course, you’ll need your chalk, so take your chalk bag or pouch of chalk with you, and possibly your water bottle too if your gym will allow it. Otherwise, just leave it with your other stuff or wherever everyone else leaves their water bottles.

When you climb, leave your chalk bag or chalk pouch away from those same dangerous areas that you yourself should be keeping away from. Chalk left under where a climber falls would cause them to try to avoid landing on it, which means not landing properly. And, as you might imagine, not landing properly can cause injury.

Basically, as a rule of thumb, you should leave your chalk where you’ll probably be sitting down for a breather after the climb you’re doing.

While it’s rare to find a loose hold, make sure you report it to a member of staff immediately if you find one.

Do remember though, that holds might have a little bit of give when you grab onto them, but they shouldn’t actually rotate or anything.

A small amount of wobble is completely fine, but if you grab a hold and think, “whoa, what’s up with this?” then go ahead and report it to a member of staff. They’ll be glad you did, because it’s down to the climbers to mention this stuff when they notice it.

Climb Down Whenever You Can

Yeah, falling can be fun in itself, but do try to climb down whenever you can.

Once you’ve reached the top hold and put both hands on it, you’ve completed the route. Use any color holds you like to climb down, because there’s no need to stick to a color at that point, unless you’re setting yourself a downclimbing challenge or something.

This one’s for you. It’s not so much a safety concern, more of a “minor injury” prevention thing.

Well, I guess that does make it a safety tip. Anyway, make sure you use chalk, and use enough of it.

One: you can tear your hands to shreds. I did exactly this on my first time, and it took two or three weeks to heal. I don’t have the pictures anymore, but you probably don’t want to see that kind of thing.

Two: you can slip off unexpectedly, which can lead to injury in any number of ways, from bumping holds as you fall down to just plain not landing properly. This is also one of the reasons we use climbing shoes rather than sneakers or something.

Here is a chalk ball that comes in a resealable ziploc bag, which will probably be cheaper than the chalk for sale at your local bouldering place. Chalk balls also last longer than loose chalk, they spill less, and they apply chalk in a less “chunky” way on your hands.

Anyway, that’s it. Have fun, and climb safely. You’ll get used to the whole thing in no time.

As a final note, I’ll say that you should make sure you’ve had enough sleep before you go climbing, because sleep plays a huge role in the level of awareness you have. If you have trouble sleeping, or simply can never fall asleep early enough, then this guide is a great resource on how you can fix that.