“What am I supposed to do with that?”

Every new climber has had this same experience, being stopped in their tracks with this question burned into the back of their minds.

Some holds? Yeah, they make sense. Sometimes it’s obvious where you hand goes.

But others? Well, let’s just say they look like they’re specifically designed to your life as hard as possible.

Here’s the interesting thing though: they’re actually not.

That is, there is a way to tackle every type of hold, and knowing this is enough to make a significant difference to your climbing ability.

If you learn how to use each hold to its full potential, it’s going to completely change your climbing game forever.

Not only that, but learning how to deal with the different types of holds you’re facing is perhaps one of the fastest ways to make a significant improvement to your climbing.

It only takes, say, a few minutes of reading this post and then a good night’s sleep.

The next thing you know, you’ll be looking at a hold that used to seem impossible and let out a sigh of relief, because you know how useful it really is for your next move.

The Different Types of Holds

One thing to mention, before I get into the differences between the each type of hold, is that I’ll often be talking about something called “positivity.” That is, I’ll be describing holds in terms of how “positive” they are.

This is nothing to do with their personal and emotional well-being. It’s simply a way of describing how much of strong edge there is for you to grab onto.

A flat surface has zero positivity, as you’d expect.

So, let’s get right to it then. 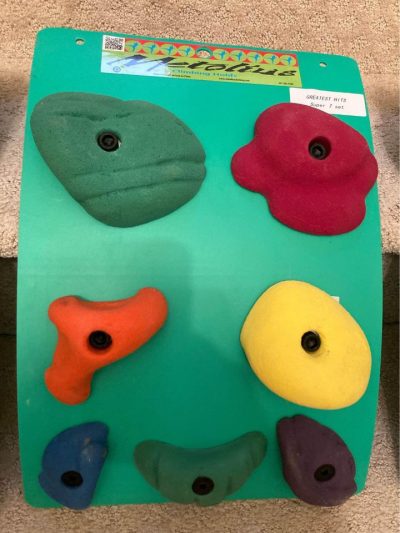 Jugs are every climber’s best friend.

You probably already know which ones they are, just from me saying that.

Jugs are those big, open holds which are so easy to get your hands around that they’re practically ergonomic.

As you’d imagine, you’re not going to find many of these on anything but the most beginner-friendly of routes.

You’ll often find that jugs provide the perfect resting spots during some of the longer or harder climbs, if they have any at all, so keep this in mind if you spot one on an advanced route.

I’ve always thought a better name for these would be “finger jugs,” because that’s exactly what they are. They’re jugs, but only your fingers can fit in them.

They’re pretty straightforward, like regular jugs are. Just wrap your fingers around the positive edge as much as you can.

That’s all there is to it.

They’re going to get your arms severely pumped. It’s just insane how much strain these holds put onto your forearms.

If you’re a new climber or you’re not used to them, you’re going to quickly lose your finger tendon strength if you’re trying routes with some of these thrown in.

Not only that, but for the next few days you’re going to be struggling to grip anything. You’ll be holding your morning coffee with both hands, out of the complete inability to hold it in one without it shaking everywhere.

My advice? Use an open-handed grip on the narrow positive edge of the crimp hold to tire yourself out less quickly.

Granted, you get less power this way, but power is useless if your arms are useless. “With great power comes great responsibility”; that sort of thing.

You want your fingertips on the positive edge of the crimp, with the rest of your hand flat against whatever it can.

Of course, if you’re no wimp when it comes to crimps, then you can try the powerful “full crimp” technique to simultaneously impress your friends and destroy your arms.

What you want to do is keep your hand straight but tuck your fingers in on themselves. They’ll be straight out at the first knuckle, but bent at the second and third knuckles.

Again, use this only in a clutch situation unless you can handle it.

I’d highly recommend training your finger tendon strength if you want to master the crimp. Just be sure to work on it gradually.

It’s so easy to overdo it. You have been warned. 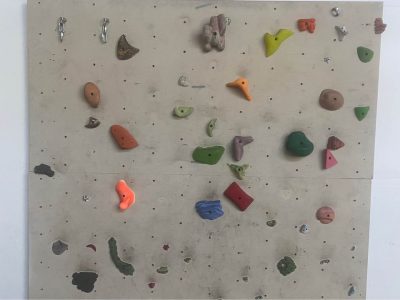 They’re basically crimps but with more room on the flat, positive edge.

Of course, you can still use a full crimp grip if you’re a masochist, and you will get some extra power that way, but you’re far better off just getting as much of your fingers as possible onto the positive edge of the hold.

Also, be sure to keep your arms loose and straight when climbing edges. It’ll keep fatigue to a minimum.

Slopers are tricky. They’re large, but have zero positive edge.

You’re going to be relying entirely on friction to pull yourself up, so make sure you keep your hand as flat as possible around the hold to maximize the surface area of your skin in contact with it.

With slopers, body position is key. It’s vital that you make your center of gravity as close to the wall as possible.

If you’re angled too far away from the wall, you’ll be trying to pull against the hold at a greater than 180 degrees with the lower half of your hand. What this means is that your grip on the sloper will be halved too – and that’s something you really don’t want on a hold that’s all about grip.

Of course, it goes without saying, if you spot some slopers on a route you’re about to climb, make sure you’re well chalked up, with the chalk covering the entire surface of your hand, including your palms.

The good news? They have two positive edges.

The bad news? They’re both vertical.

Yep. That means you’re going to be relying on friction again (yay).

Despite the positive edges of a pinch being useless by themselves, the hold is really not that bad when you use them both together in a – you guessed it – pinching motion.

You’d be surprised how much of a difference it makes being able to use your thumb to grip onto a hold. Your thumb adds so much power that you’re not going to have any problems with getting enough friction to pull yourself up.

Because of this, you should use your thumb to pinch-grip onto a hold whenever possible. It’s only pinches that absolutely require you to do this, but you should generally abuse the gripping power of your thumb whenever you can. 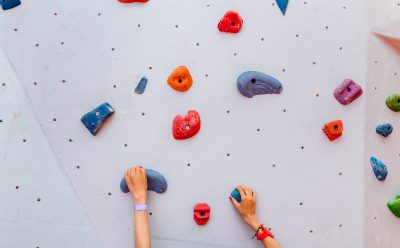 Volumes are very common in indoor climbing gyms, but some gyms like to use them more than others.

The great thing about volumes is that you can use them no matter which route you’re on.

I must point out though, that some gyms have different rules for volumes in that they only allow you to use them if they have a hold of the color of your route on them. You can always ask the staff if you have any doubts, or just use them anyway if you’re bad.

You can use volumes in a variety of ways, pushing off or mantling them as you see fit. There’s no absolute right or wrong answer because volumes differ greatly from one to the next.

Just be sure to make as much use of them as you can. You’re almost always better off using them than not.

Volumes are your friends, and you should never forget that.

Pockets are interesting. If you didn’t know the trick to using them, you’d be tempted to try using the top of them as a kind of less-positive edge, or a gripless sloper.

The problem with pockets is that you usually can’t fit all of your fingers in them. If you can, then you know what to do, but if you can’t, then there’s a trick to it.

The trick is simply to prioritize which fingers you use. Of course, use as many fingers as you can fit in the pocket, but if you have to choose then be aware that the choice matters.

You want to prioritize your middle finger above all else, because it’s far stronger than your other fingers.

If you can only use two fingers, then use your ring and middle fingers. Your ring finger will be better than your index finger.

Finally, if you can only use three, then use your ring, middle and index fingers.

And lastly, don’t forget to pinch the hold with your thumb for a cheeky bit of extra grip!

Underclings are far more common in outdoor rock climbing than in the gym.

They’re quite unusual, in that the positive edge is almost parallel with the wall, and the only way to grab them is from underneath.

Because of this, they’re only really useful when the hold is around your midsection. If you grab one that’s too high up, it’ll feel like you’re tackling some weird backwards sloper.

If you grab it at the right height though, you can really pull yourself up with it. Underclings present possibly the greatest potential of any hold for you to show off your magnificent bicep muscles.

Everybody loves horns. They’re like jugs, but with a couple of important differences that you can take advantage of.

First of all, you’ll be using your hand to grab the side of the horn, which you’ll often find allows you to get some nice leverage off of it. As you grab the horn, you’ll be able to turn slightly sideways to extend your reach to the next hold after it.

Make use of this whenever you can.

The second thing to note about horns, is that you have some choice in which part of the horn you grab on.

The advantage of grabbing the narrower, further away part of the horn is that you’ll be able to get your hand around the sloped, positive side of it more easily.

However, there’s something you need to consider when doing this, and that is that you’ll be effectively climbing on a slight incline away from the wall.

Unlike how you’d expect, leaning backwards like this isn’t entirely a bad thing. You can use your angle to smear against the wall or push off narrow footholds more effectively, and it even gives your legs leverage for some dynamic movement.

The other way you can grab a horn is at the wider part near the base. You’re less likely to get your hand around it this way, so you’re going to have to keep your hand as flat as possible over the positive edge.

Being close to the wall also makes it easier to achieve a lock off position so you can reach for the next hold. Also, positioning your center of gravity close to the wall gives you the ability to use your legs to take off some of the strain from your arms.

Horns are useful. Use them wisely.