Sure, it’s pretty much single the most dangerous part of climbing, but it sure is fun.

And that’s why you want to invest in a strong, reliable rappel device.

But what is often overlooked is having something reliable that you can rappel off. The thing is, it doesn’t matter how reliable your belay / rappelling device is if your only option is to rappel directly off the anchor chains.

You’re pretty much asking for trouble if you do that, and attempting to lower through the anchor is even worse. The moving rope causes damage to the anchor very quickly, and it’ll end up breaking sooner or later – especially if the rope is dirty, and even more so if it’s sandy.

Then you get the option of saving a carabiner, cleaning the anchor, and setting up a rappel station with nothing more than a rap ring and some webbing. That’s the beauty of it.

The rappel ring and webbing combo is far lighter, and far cheaper than leaving a locking carabiner behind each time, and that’s why it’s worth carrying them with you on your climbs.

Besides, if you lower, you’ll be missing out on feeling like you’re in an action scene of some spy movie.

So, agent, let’s take a look at which rappel rings will be the most suitable for your next mission: 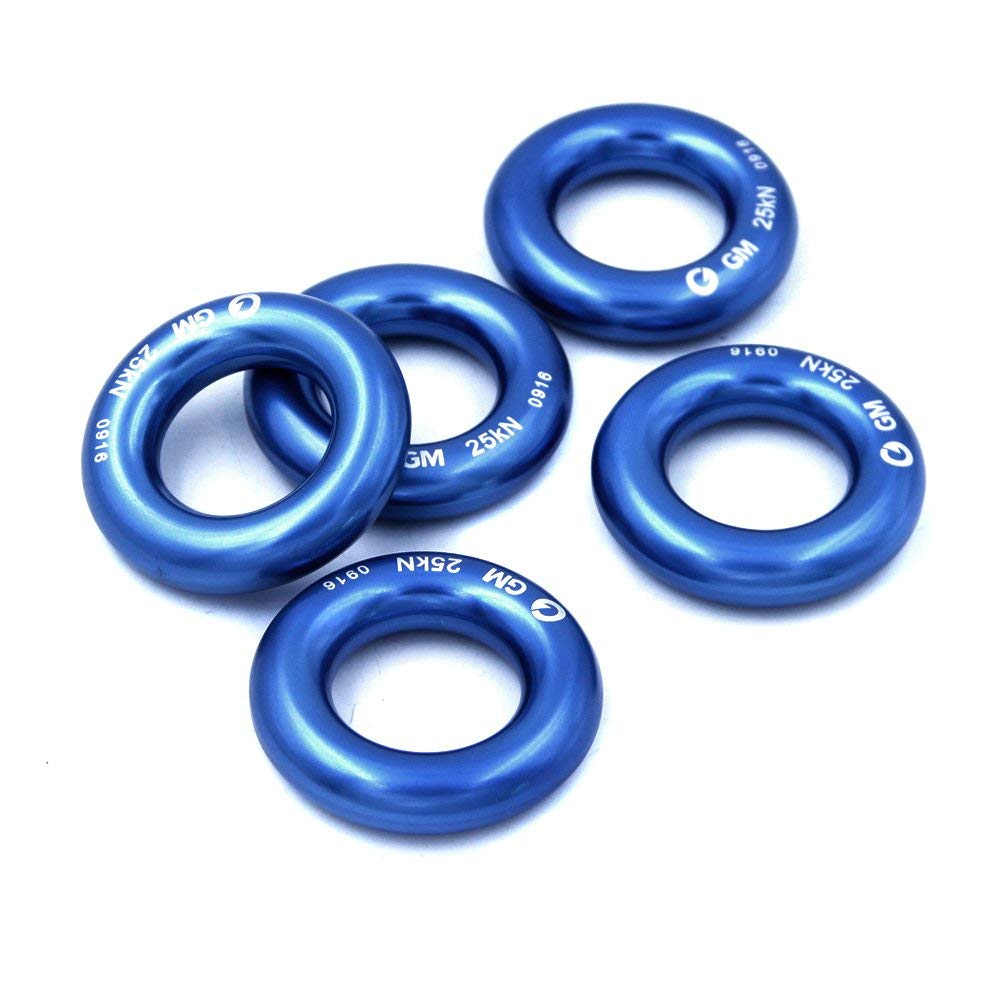 This rappel ring is flawless, and it comes in a pack of five.

To put it into perspective: each one is just as strong as a locking carabiner, yet weighs half as much, while costing a quarter of the price.

At this point, there’s literally no reason to use a carabiner instead. But some people still do.

“Why?” you ask. Well, there are some people out there who are wary of rappel rings in general.

“Why?” you ask again, turning your head to one side like a confused puppy. The truth is that rap rings have a bad rep, and in the past, at least, it was for a good reason.

You see, in the past, they used to be made of rolled aluminium, and the seam where the metal was joined was be a weak point that pretty much rendered them unsafe a lot of the time.

More recently, there have been a lot of hollow rappel rings being made, which tend to wear scarily quickly. You’ve probably seen them around on uncleaned anchors; they have big grooves in them from overuse, misuse, and general abuse.

These GM Climbing rappel rings are both seamless and solid all the way through – a golden combination that ticks all the boxes.

But there’s something else about these rappel rings that really makes them stand out, and even gives them yet another edge over carabiners when it comes to rappelling:

These rappel rings are really smooth to pull rope through. 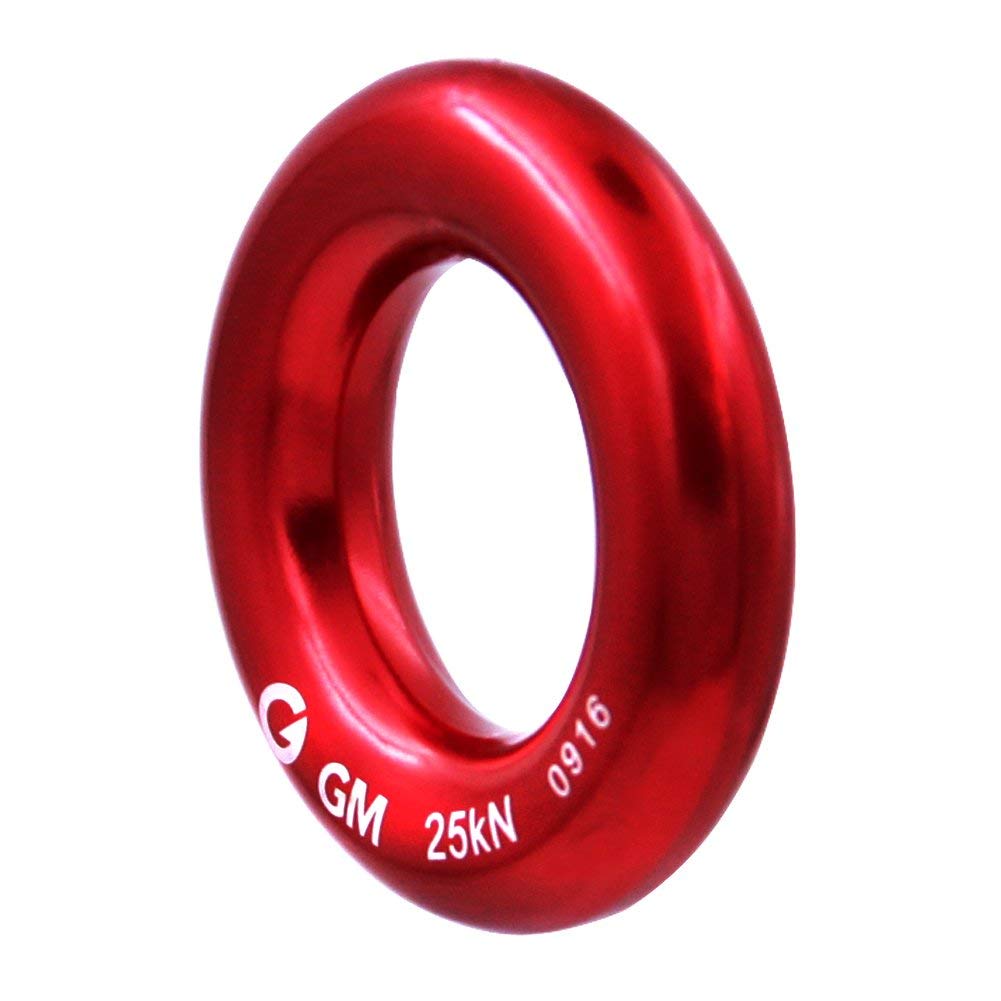 Let’s say you try double rope rappelling off a carabiner rather than a rappel ring. You’re double roping because you want to be able to get your rope back after you’re safely at the bottom.

But what’s that? Your rope is stuck?

You give it another tug, but it just won’t come free. Great, now you’ve lost a rope as well as a carabiner.

The GM Climbing rappel ring prevents this by being ridiculously smooth, while having enough thickness to allow the rope to slide cleanly through perfectly rounded shape of the ring.

Let’s take a look at the details. 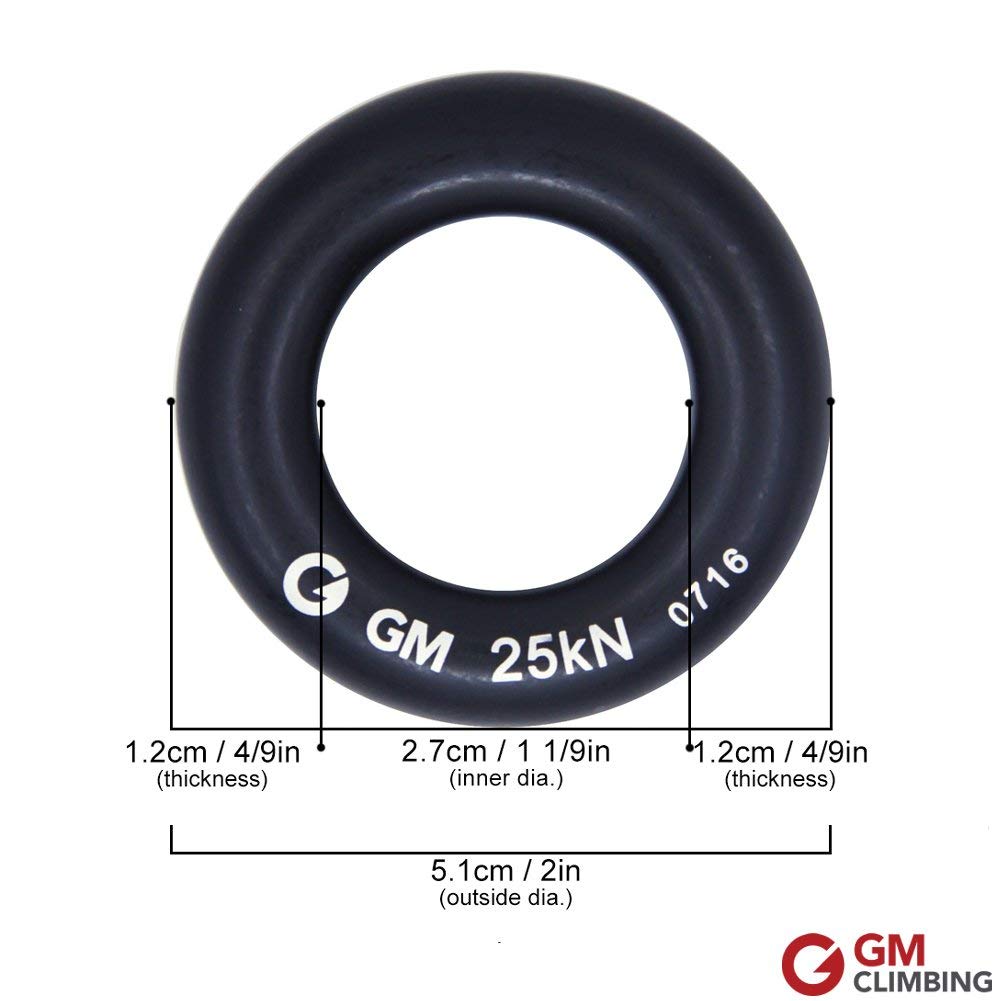 These rap rings are as light as they come, at only 1.34 ounces each.

There’s also a larger sized ring that’s about 1 inch bigger in diameter and weighs 1.92 ounces reach. That one only comes in a gold color. 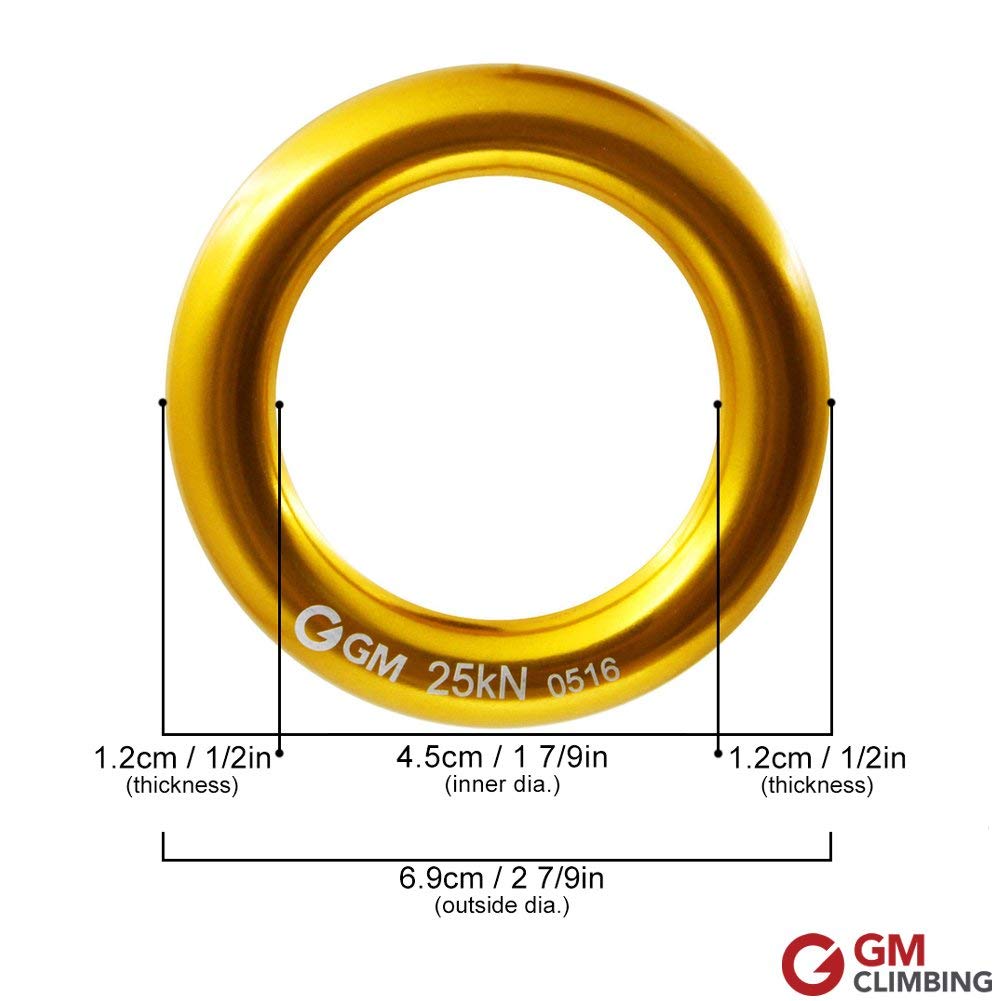 Honestly, you don’t need a larger ring. The “small” ones are plenty large enough.

They’re also pretty much the best deal on rap rings out there. Most rappel rings cost as much as this pack of five for only one or two, and still aren’t quite as strong or smooth.

For this reason, along with everything else mentioned above, the GM Climbing rappel rings are an outstanding product.

They come in black, blue and red. You can click here to view them on Amazon.

Now, I would talk about alternatives next, but really, there’s not anything better out there. The GM Climbing ones have it all: they’re light, efficient, cheap and come in a nice choice of colors.

All you need now is some webbing for when there’s no quick link on the anchor to hook a rappel ring onto. Take a look at this post here for the nitty-gritty on webbing.